The Tokhmeyevo I kurgan cemetery

The Tokhmeyevo burial ground is situated at the edge of the forest zone in the Middle Volga region, 20 km south of Cheboksary, the capital of the Chuvash Republic.

The Tokhmeyevo burial ground is located in the northern part of the Volga upland and occupies flat upland surface (Fig.1) close to the sides of the small stream valley (170 m a.s.l.; 20 m above the stream valley). The geological setting includes the Upper Permian sedimentary rocks (sandstone, limestone, and dolomite) and Quaternary deposits having a thickness of 18 – 20 m. Soils at the study site formed in loess sediments that are 5 – 10 m thick. The vegetation consists of a broadleaf forest with lime (Tilia cordata), oak (Quercus robur) and acer (Acer platanoides). According to the soil-geographical zoning, the study area belongs to the Oka-Sura province having grey forest soils (Phaeozems, IUSS Working Group WRB, 2015) that formed in loess. However, soil pattern is very complex and includes Phaeozems, Chernozems and Retisols, depending mostly on the parent material. The climate of the study area is temperate continental with a mean July temperature of 18.6˚C and a mean January temperature of -13.0˚C. The soil is usually frozen to a depth of 75 cm during the second half of the winter; in extremely cold winters the depth of freezing reaches 140 – 150 cm. Mean annual precipitation is 510 – 550 mm with 70% falling during summer months. The mean annual precipitation/evaporation ratio is about 1.3 - 1.4. 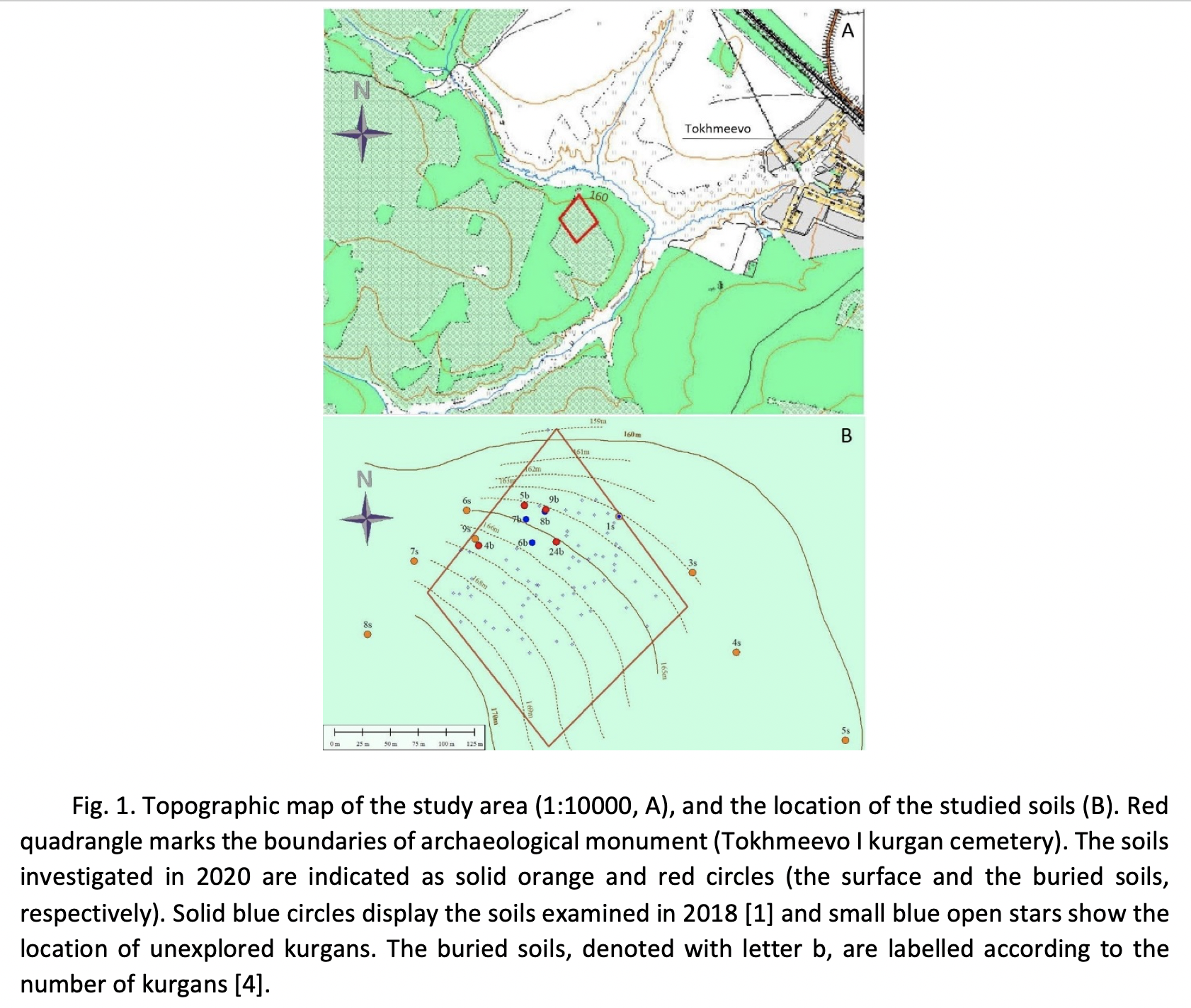 The kurgan cemetery was constructed by cattle-breeding tribes of the Abashevo culture (2500–1900 yrs BC). The burial ground includes 48 kurgans with a preserved height ranging from 0.3 to 2 m. The mounds are mostly circular with 6-20 m in diameter; some are elongated. The studied kurgan#8 has a rounded shape, height of 120 cm and a diameter of about 5-6 m and is surrounded by similar kurgans at a distance of 15 – 30 m. One of the most vivid impressions of the Abashevo kurgans is the complex architecture of the burial mounds that is well seen at the Tokhmeyevo cemetery because of the diverse soil horizons that were used for their construction. The earth mounds are made of the upper horizons of soils that were cut off from the surface in close vicinity.

The buried soil (8b on Fig.1) is separated from the earth mound by a thin strip of yellow heavy loam, presumably excavated from the subsoil during the digging of the burial chamber (Fig. 2d). Such strips are quite common for the kurgan mound with the burial chambers. They are a valuable indicator of the buried surface. The soil profile is not truncated and is well preserved on three walls of the soil pit with a similar thickness of soil horizons (Fig. 2a). The mean thickness of the humus layer of the surface soil (Ah+AhE horizons = 22.3 cm) and the buried soil (Ahb+AhEb = 21.1 cm) is similar and varies in similar range. The buried soil, a Glossic Folic Albic Eutric Retisol (Abruptic, Loamic, Cutanic, Differentic, Ochric) has a profile development similar to the surface soil. It has a strong textural contrast at the abrupt boundary between the albic and the argic horizons, overprinted by retic properties and albeluvic glossae (Fig. 2d).

The major difference is the humus horizon. In spite of a possible diagenetic alteration, the dark colour (7.5 YR 3/1) and strong fine granular structure meet the criteria for mollic horizon. The albic material is also well expressed, especially at the boundary with the argic horizon (7.5 YR 5/1). The dark patches in the AhE horizon show that the mollic horizon was probably thicker and degraded with the development of the albic material, especially above the boundary of abrupt textural difference (Fig. 2e). The argic horizons are similar to that of the surface soil: both the Bt1b and the Bt2b horizons have a strong subangular blocky structure changing from fine to coarse. The structural units in the argic horizons are covered by multi-layered brown clay cutans. Another striking difference with the surface soil is the abundance of black humus cutans (2.5 YR 2.5/2) on top of brown clay cutans in the middle and lower part of the solum (Fig. 3a, e). They cover all surfaces (subangular blocks and prisms, Fig. 3b) and fill in all root channels (Fig. 3c, d). Similar to the surface soil, the 2Ahkb horizon starts at 90 cm with an abrupt boundary. It has a high porosity and, like in the surface soil, the carbonates impregnate the matrix and form small hard nodules. The abundance of rhizoliths and fine granular structure indicate the former surface horizon of the pre-Holocene Calcaric Cryosol (Fig. 3c).

The profile of the surface soil (1s on Fig.1) developing under a broadleaf community (Fig.4a) is a typical Retisol – Glossic Folic Albic Eutric Retisol (Abruptic, Loamic, Cutanic, Differentic, Ochric). It has a well-developed Ah horizon (10 YR 4/2, Fig. 4b,) that passes over to a transitional AhE and a light-gray albic horizon. The boundary between the albic and argic horizons meet the criterion for abrupt textural difference and displays well expressed retic properties with albeluvic glossae (E/Bt horizon, Fig.4c). The argic horizons have a strong subangular blocky structure changing from fine to coarse downward. Structural units are covered by brown multi-layered clay cutans and abundant uncoated silt and sand grains (skeletans) on top (Fig. 4d). In the Bt2 horizon, the blocky structure forms sub-units of prismatic units. The calcareous layer at the bottom of soil profile displays abundant rhizoliths and granular aggregates, similar to that described earlier (Makeev et al., 2019) in the vicinity of the Sareevo settlement, 50 km west as an upper horizon of a buried Cryosol (Fig. 4e). The boundary between the Bt2 horizon and the 2Ahb horizon is abrupt. Slight effervescence starts from the top of the 2Ahb horizon though strong effervescence accompanied by an assemblage of carbonate neoformations appears first in separate patches. Carbonates impregnate the soil matrix and form pseudomycelium, soft concentrations, and hard nodules. The 2Ahb horizon, likely of pre-Holocene age (MIS2?), could be discerned by a slightly darker colour, fine granular structure and high porosity of its. 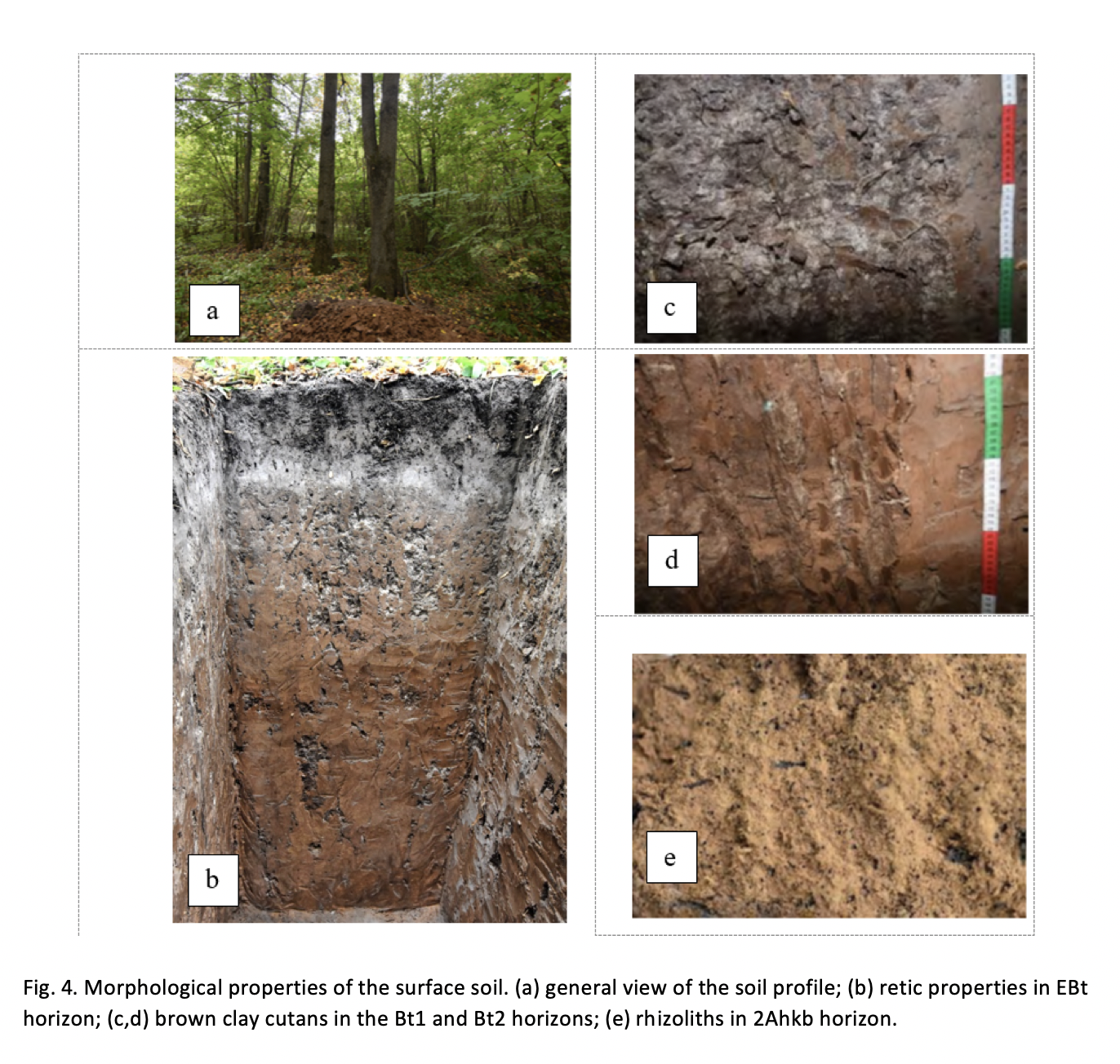 The Tokhmeyevo burial ground of the middle Bronze Age allowed studying the Holocene environmental trends in the broadleaf forest area by comparing soils buried below kurgans with undisturbed surface and soils located nearby. The soils under study developed from the same parent material (mantle loam) and under similar site conditions. Both soils were formed on similar surfaces having a uniform lithology (mantle loam), at the same elevation and in close proximity to each other. The objective of our study was to find out whether buried soils differed significantly from surface soils and whether such differences could be correlated with environmental changes. By comparing our results from Tokhmeyevo with those published already earlier from the Sareevo Settlement (Early Iron Age) and from the Taushkasy kurgan cemetery (Bronze Age) increased the reliability of our results. It can be concluded that the landscape of the study area was stable during the Late Holocene; also the forest environment did not change, at least since the beginning of the Subboreal. Landscape stability in the studied area during Late Holocene is also supported by earlier published data based on comparison of the surface and buried soils in close proximity from the Tokhmeyevo cemetery (Sareevo Settlement of the Early Iron Age, and the Taushkasy kurgan cemetery of the Bronze Age. The combined analyses of soils of the three monuments increased the reliability of conclusions.

It is confirmed that a mollic horizon does not necessarily indicate an open steppe environment. It could also develop under the canopy of a parkland forest with a rich herbaceous cover before the end of the Middle Holocene. Black humus coatings indicate the beginning of degradation of the mollic horizon since the Middle Bronze Age during episodes of extreme wetting by summer downpours. The development of clay cutans preceded the formation of mollic horizon and probably lasted through the whole Holocene, interrupted briefly by arid phases. The pedogenetic proxies (albic material, mollic epipedon, luvic features, microbiomorphic assemblages, etc.) are in good agreement with palaeogeographic proxies from other archives (raised bogs, fluvial archives).

The burial mounds of the Abashevo culture were constructed mostly using the upper soil horizons. Construction technologies provide an independent basis for paleogeographic reconstructions.  The use of albic material and argic horizon for earth mound construction proofs the similarity between the buried and surface soils since the Bronze Age until today. Such construction technologies can be used for studying the chronology, correlation and cultural links between various cultures from the Neolithic to the Sarmatian time in the forest-steppe ecotone. 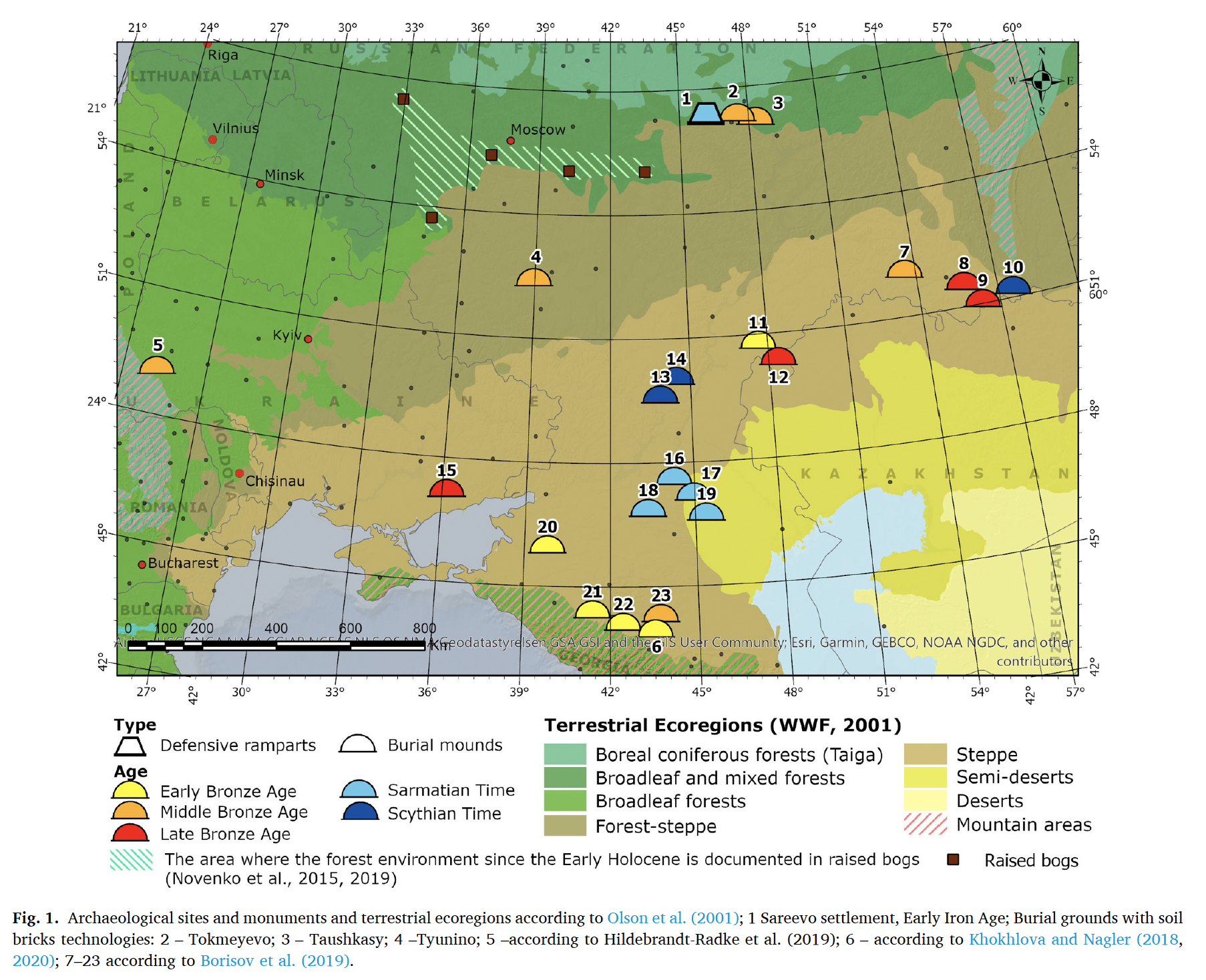 Table 1. Palynological spectra for the buried and surface soils (in the numerator – %, in the denominator – number of grains).